Nazi Germany and the Ark Re-engineered 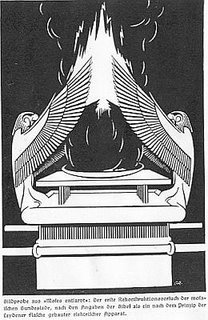 The weirder aspects of Nazi Germany are en vogue once more, but this time in more scholarly books than their 1960's and 1970's illustrious counterparts. Two books, Himmler's Crusade : The Nazi Expedition to Find the Origins of the Aryan Race (2003) by Christopher Hale and The Master Plan : Himmler's Scholars and the Holocaust (2006) by Heather Pringle focus on the bizarre beliefsystems of Himmler's roster of archaeologists, scientists and researchers.

They were encouraged by the head of the SS himself, who harbored his own particular and weird ideas. Where this all might have led to, has been the source for many wild theory and conjecture over the years, and, some say, lay also at the basis for the first Indiana Jones film, Raiders of the Lost Ark (1981).

That Himmler's researchers, who can be seen as Indiana Joneses gone to the dark side, clustering at an evil Hogwarths called the Ahnenerbe Institut, is the main focus of Pringle's book. Her immensely readable study was preceded by the groundbreaking work of Michael Kater, Das Ahnenerbe der SS 1935 - 1945 which first appeared in 1969, was published in 1974 and remains in print, but is lesser known outside Germany as it is still untranslated.

In these post-Von Däniken times with its legacy of explaining the wonders of old as feats of advanced technology, two authors have proposed a theory as to what the Ark of Covenant really might have been. In their article Re-engineering the Ark which was published in Fortean Times 207, authors Michael Blackburn and Mark Bennett speculate on the Ark as being a source of electrical energy. This theory appeared much earlier in Nazi Germany.

In 1938 a book by Konradin Aller was published suggestively entitled Moses Entlarvt: die Wunder Moses als Luftelektrische Vorgange (Moses Unmasked: The Miracles of Moses as Atmospheric Electrical Events), with drawings by Werner Graul (the drawing of the Ark by this post is taken from this book). The premise of the book was that Moses was a hoaxer; all the divine miracles that accompanied him were merely the effects of laws of nature. Thus the Ark was nothing more than a repository of electricity. That it would have been a marvel in itself and would have made a Von Däniken proud to postulate that two millennia ago people already understood the intricate workings of electricity and were able to build a complex machine with it, cleary eluded the author.

Graul, who made a series of evocative black and white drawings for the book, also designed the film poster for Fritz Lang's 1926 dystopian classic science fiction film Metropolis. The film was produced by German film production company UFA. Around that time, a set painter named Albin Grau was employed at UFA. Grau became a member of the Berlin occult order Fraternitas Saturni, founded in 1928 after a rather tumultuous visit by Aleister Crowley. The order specialised in an unusual mixture of avantgarde technology and magical ritual partly based, or so it claimed in the pages of its official organ Saturn Gnosis, on the theories of Nikola Tesla.

Neither had Aller postulated a new theory; in his article A Fairytale of Electricity, published on September 9, 1915 in Manufacturers' Record, Tesla wrote:


"...Moses was undoubtedly a practical and skillful electrician far in advance of his time. The Bible describes precisely, and minutely, arrangements constituting a machine in which electricity was generated by friction of air against silk curtains, and stored in a box constructed like a condenser. It is very plausible to assume that the sons of Aaron were killed by a high-tension discharge, and that the vestal fires of the Romans were electrical."

Grau's paintings and drawings adorned several of the five lavishly produced Saturn Gnosis issues. The last issue was published in 1930, the Berlin order disbanded not long afterwards, due to the prohibition imposed by Nazi Germany on the esoteric societies. To remain in biblical terms; UFA had its ateliers at Babelsberg.
Posted by theo paijmans at 1:57 PM